If you threw a party for the whole world, and served only the bourbon that is now aging in barrels in Kentucky, every man, woman and child* on the planet could have four drinks apiece.
Source: Colin Blake, creative director for Flavorman and Moonshine University at theDistilled Spirits Epicenter in Louisville
*The Bourbon Babe is not suggesting that children should drink, but she didn’t want to redo the math.

Old Forester was named for Dr. William Forrester, a Civil War hero and one of the investors who backed George Garvin Brown’s groundbreaking idea to sell bourbon only in bottles to ensure quality and consistency. Dr. Forrester himself was not old; he was just 34 when the brand was founded in 1870. The “Old” in the name referred to the fact that the bourbon was matured in barrels.

Did you notice the discrepancy in the names? The bourbon was originally called Old Forrester, with three Rs, until 1890, when Dr. Forrester retired and the spelling was changed, says Brown-Forman master distiller Chris Morris. 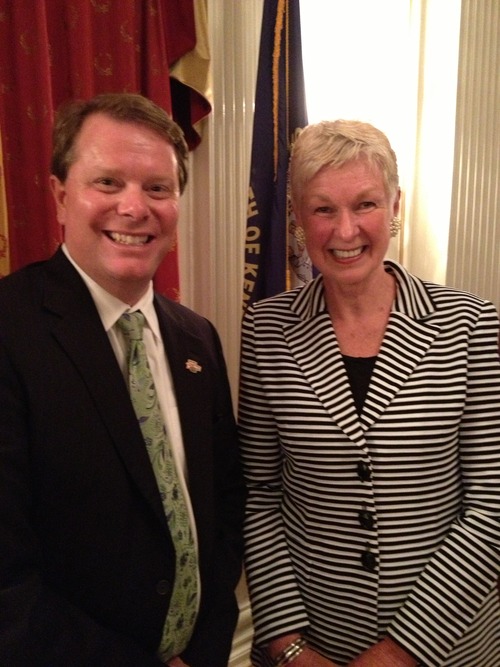 The first woman to ever serve on the Kentucky Distillers’ Association’s Board of Directors was Lois Mateus. She was appointed to the board in 1992 as the director from Brown-Forman, where she retired as senior vice president in 2008. KDA president Eric Gregory, above with Mateus, noted that other board members appointed that year included Jimmy Russell of Wild Turkeyand Bill Samuels Jr. of Maker’s Mark.

Abraham Lincoln is the only U.S. president who was also a licensed bartender.

The venture didn’t last long, however, as William Berry was apparently an alcoholic who drank during business hours. Lincoln sold his interest in the store to Berry after three months; when Berry died two years later, Lincoln assumed the debt, finally paying it off in 1848.

One of the earliest known recipes for sour mash dates to 1818 and is attributed to a woman. Catherine Carpenter of Casey County, Ky., ran her husband’s distillery after his death and recorded recipes for both sour and sweet mash.

Yesterday I took you to Corsair Artisan Distillery, which is in the process of expanding into a historic building that fronts on Fountain Square in Bowling Green. Here’s a fun piece of that history: Built in 1925 to house the Pushin Department Store, the building had the first public elevator in Bowling Green.