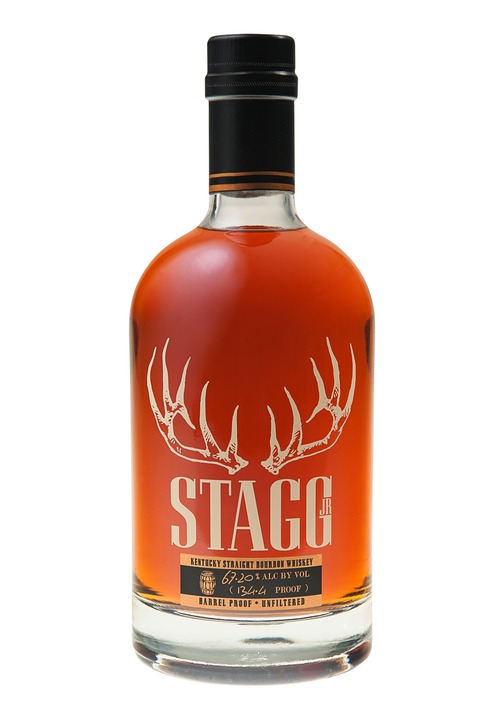 George T. Stagg has a son! In 2002, Buffalo Trace Distillery introducedGeorge T. Stagg Bourbon, a limited-release barrel-proof whiskey, that is part of its annual Antique Collection series. The new Stagg Jr., also uncut and unfiltered, will be available several times per year. George T. Stagg is typically aged around 17 years, while Stagg Jr. is aged about half as long. Its proof will vary; this initial batch is 134.4 proof. Stagg Jr. “maintains the integrity of the brand – a big, bold whiskey bottled at barrel proof but at a more affordable price,” Buffalo Trace said in announcing the new product. The distillery sent The Bourbon Babe a sample for tasting. I compared it against the 2012 Stagg release; here are my thoughts.

Aroma: The noses of the two whiskeys are very similar, and very inviting – sweet, with notes of vanilla and brown sugar. There’s a slight tingle, but not as much as you might expect considering the high alcohol content of each (the 2012 was 142.8 proof).

Taste: The Stagg Jr. opens with a blast of heat that quickly dissipates, making way for cinnamon and brown sugar and a hint of chocolate. The warmth returns for the short, dry finish, which remains spicy (cloves, maybe?) with a slight metallic overtone from the rye. The Stagg Sr. is richer and more complex, almost chewy, with much more tannic wood character. The heat is more evenly distributed, leading to a longer, smoother finish.

Verdict: I know it’s won a slew of awards, but the George T. Stagg has never been my favorite of the Antique Collection. While I like high-proof bourbons, I have often found that this one has too rough an edge. But if you do like Dad, you’ll probably like Junior. Like a lot of kids, Stagg Jr. is not quite as well-rounded as its older counterpart, and it’s even more hot-headed. But with a splash of water, it will get you through until the next release of George T. Stagg.