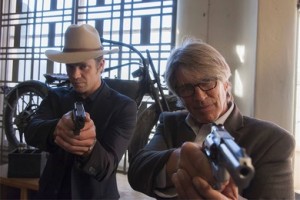 The episode was titled “Wrong Roads,” but as far as the Whiskey Watch is concerned, “Justified” was back on the right track this week, with two sightings before the opening credits: Boyd poured shots of his go-to bourbon, Elmer T. Lee, to “celebrate” the Mexico deal with Daryl Crowe, and Raylan was nursing a shot of unidentified whiskey before deciding to head to Memphis.

Once in the Home of the Blues (and ribs), we met DEA agent (and Ghost of Raylan Future?) Miller (Eric Roberts, above) and his worn flask, first filled with the “cheap shit” that ushered Hot Rod out of this life and later refilled with Maker’s Mark at Johnny’s Bar from the bottle left behind by dynamic duo Jay and Roscoe, played by real-life brothers Wood and Steve Harris.

Meanwhile, over at Audrey’s, Kendal was practicing his bartending skills by fashioning a “This Place Sucks” cocktail with Ancient Ancient Age.

The action picked up with the whiskey this week. Coincidence? All I know is, I’m rooting for Dewey. I’m tired of Danny Crowe’s crazy and Daryl Crowe’s awful Southern accent. O reason not the need.