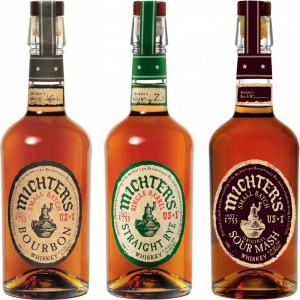 When I first heard the name “Michter’s” a few years ago, I assumed it was a Dutch surname. I knew that the brand name had originated in Pennsylvania in the mid-1970s at a distillery that went bankrupt in 1990, and that Joseph J. Magliocco of Chatham Imports had resurrected the name in 2004 for whiskeys he first sourced and blended from Kentucky distillers and is now distilling at Michter’s Distillery in Shively. Clearly, Magliocco believed the name indicated quality. But who was Michter?

It turns out that Michter was not a person; it was two. In doing some research on the distillery for an upcoming article, I discovered that Philadelphia-area liquor broker Lou Forman named the brand in honor of his sons MICHael and peTER in the 1950s at Pennco Distillers near Schaefferstown, Pa. (source: The Bourbon Scout). In 1975, Pennco was purchased by a group of businessmen who named Forman president, and he renamed the entire distillery “Michter’s.” In 1997, seven years after Michter’s intellectual property was abandoned along with the physical distillery, Magliocco trademarked the name. So now you know.