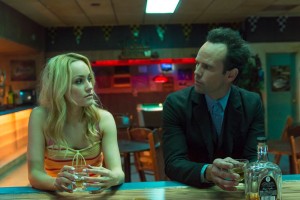 This week on “Justified,” we learned several things: Ava can take care of herself; Crowes flock together; and cigarettes really can kill you. RIP, Mr. Picker. Damn.

That explosive scene was a good reminder of something we already know: Never underestimate Boyd Crowder, who had one of the best lines of “The Toll”: “I may not know a lot about a lot of things, but I do know how to blow shit up.”

He also knows what bourbon he likes, and in an excellent demonstration of continuity, that bottle of Elmer T. Lee, above, has gotten progressively emptier over the past three episodes.

Otherwise, whiskey sightings were once again in the commercials – a Jack Daniel’s spot featuring Frank Sinatra (“That’s the nectar of the gods, baby!”) and the Jim Beam ad with Mila Kunis (who we hope is not currently imbibing, as she is expecting a baby).

Boyd and Raylan now both have reasons to take out Daryl Crowe, who again showed how important family really is to him by forcing his nephew to take the fall for Art’s shooting after beating up his sister last week. This Crowe’s goose is cooked, and his downfall can’t come a minute too soon.