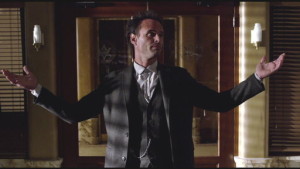 Your savior has arrived,” Boyd Crowder proclaimed as he strode confidently into the U.S. Marshal’s office in last night’s episode of “Justified,” titled “Starvation.” And once again, Boyd was our savior here at Whiskey Watch, providing the only mention of bourbon with his trusty Elmer T. Lee, offered by Daryl Crowe Jr., who has at least learned that much about Boyd.

Everyone was too busy to linger over drinks as they set up what promises to be an exciting season finale. The Mexican cartel knows that Wynn Duffy lied about killing Boyd. Boyd knows that Raylan played a role in Mr. Augustine’s death. Raylan knows everything that poor, dumb, doomed Dewey Crowe ever did. And in Dewey’s immortal words, “the anus is on” Ava to take care of herself. Meanwhile, the lives of both Art and Kendal hang in the balance.

Get your Elmer T. Lee ready for next week, folks – we’ll need it.