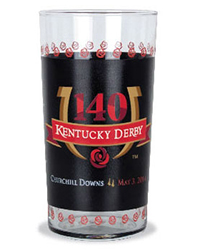 The mint julep became the Kentucky Derby’s signature drink in 1938 and unintentionally created what would eventually become the race’s leading collectible: the Kentucky Derby glass. That first year, the juleps were served in water glasses. According to racetrack folklore, the glasses were so popular that they disappeared from the tables in the track’s dining rooms. The next year, track management charged dining room patrons an extra 25 cents to keep the glass.