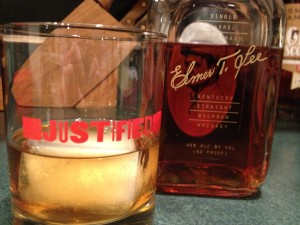 Last night was last call for Season 5 of “Justified.” From a Whiskey Watch perspective, the best sighting during “Restitution” was the Elmer T. Lee in my own personal glass, above; otherwise, we were limited to two Maker’s Mark commercials.

Plot-wise, we finally rid ourselves of this season’s annoying villain in what might be titled “A Murder of Crowes” (special shout-out to Wendy for that ballsy resolution). We said adios to the heroin subplot. And Ava finally got out of prison. After dragging out for weeks, all of those storylines were resolved quickly and almost too easily. It also seemed that Raylan was finally on his way to Florida to become part of his daughter’s life.

But as the last scene revealed, the entire season has been laying the groundwork for the big conflict that will occupy Season 6, the series’ last: Raylan vs. Boyd – with Ava square in the middle.

As we leave Season 5, Raylan seems to be back on top of his game; Boyd, not so much. While Boyd did have one spectacular behind-the-back shot last night, mostly, he shot off his mouth. That’s not unusual, of course. What was unusual was how ineffective and in-over-his-head he seemed. Sure, he managed to stall the cartel long enough to keep his skin, but he seriously misjudged his ability to recruit Alberto’s henchmen to his side, and he was unable to save poor Jimmy.

He also showed more emotion over Jimmy’s death than he did in any of his scenes with Ava. Boyd doesn’t know what to say to her anymore, and that doesn’t bode well for our wild-haired friend.

Showrunner Graham Yost tells Entertainment Weekly that the writers will return to the writers room after July 4 to start penning the final season. As the show ends, here’s a plea from me to Yost: Consider filming in Kentucky. A show this concerned with getting its bourbon right should add the authenticity of actual Eastern Kentucky locations. While it may or may not be true that “You’ll Never Leave Harlan Alive,” you damned sure won’t if you never arrive there in the first place.

See you next season, Raylan.