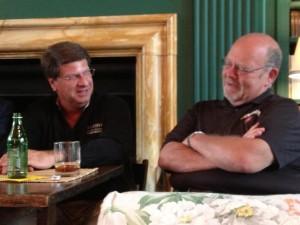 Many amusing stories were shared at the Filson’s Historical Society’s recent Bourbon Salon at Oxmoor Farm, “Bourbon Families,” but one of the most amusing involved the grooming habits of Lincoln Henderson, the longtime master distiller of Brown-Forman who came out of retirement to help his son, Wes Henderson (above left with Jim Beam master distiller Fred Noe), launch Angel’s Envy before passing away last September.

While many of us recall our dads splashing on Old Spice, English Leather or Aqua Velva, Wes said his dad favored a unique aftershave: new-make whiskey, specifically unaged Early Times. With an example like that, no wonder Wes followed his father into the whiskey business.