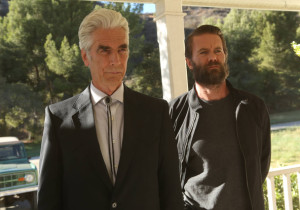 Well, if there was any doubt that Avery Markham (Sam Elliott, above left) was this season’s Big Bad, that was erased at Ava’s dining room table in last night’s episode of “Justified.” And I’m not talking about the part where he told Ava and Boyd that if they came near his property again, he would kill them; no, the telling line came before that:

“You know, I grew up in Kentucky, my life entire, yet I never developed a taste for bourbon. Even the smell turns something in me sour.” A native Kentuckian who is repulsed by bourbon is not a man to be trusted. (And much as I love Sam Elliott, neither is one who definitely skews more Texan than Kentuckian.)

The episode opened with Boyd and Ava displaying their taste for bourbon: a bottle was front and center between them as they stretched out atop the bar after drinking all night. But what bourbon? After much scrutiny in freeze-frame, I concluded that this “Kentucky Whiskey” was a work of fiction. That was corroborated by the Washington Post’s Neely Tucker (read his hilarious recap); producers told him that because Ava drove home drunk, they didn’t want to show an actual brand being misused.

(This scene was also notable for Boyd’s tender offer to hold back Ava’s hair when she seemed about to be sick and her response: “I ain’t puked up bourbon since I wore a cheerleader skirt, and I don’t aim to start now.”)

There was no doubt about what Ty Walker (Garret Dillahunt, above right) ordered later at Boyd’s; he asked for his Buffalo Trace by name. He would be back later in a ski mask (Note to Earl: It looked a whole lot more intimidating than those goofy Halloween leftovers) to rough Boyd up and give him a second warning about staying away from Avery’s business.

Of course, Avery made that even clearer in Ava’s dining room. It turns out that Avery has known Boyd since he was “peacocking around” his daddy, and Boyd seemed cowed as Avery put him in his place: “You’re still not so big. Grown, but still just playin’ PRE-tend.”

It was an act, though. Boyd headed straight to Katherine Hale, who was pouring what looked like Old Forester, and told her he planned to steal Avery’s money and then kill him. And you know he’s going to kill Ty Walker, too, if only to get a word in. Katherine, who has been sleeping with Avery, looked pleased as punch.

Am I forgetting anything? Oh, lord: Wynn Duffy in a thong. You go ahead and rehydrate, Wynn, but after seeing that, I need a drink.