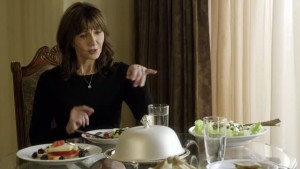 (SPOILER ALERT: DON’T READ UNTIL YOU’VE WATCHED EPISODE 4, “THE TRASH AND THE SNAKE.”)

As far as whiskey goes, this week’s episode of “Justified” left us dry and high: Bourbon was abandoned in favor of marijuana and the cocaine under that lid that Ms. Katherine Hale is about to lift during her girls’ day out with Ava.

We did have some apple-pie moonshine and this humorous exchange:

Boyd: I don’t know what that is.

Good call, Boyd. Substitute bourbon in that recipe, however, and you’ll have a Boulevardier, which you might enjoy.

The Wiz, of course, went “Bang” in a shockingly humorous scene that reminded me of some of the best deaths in HBO’s “Six Feet Under.” And Boyd’s intentions shifted from simply robbing Avery Markham to robbing him and taking over his plan to run a marijuana empire once Kentucky inevitably legalizes marijuana.

(Is it inevitable, though? Kentucky is no stranger to profiting from vices, but we don’t like our vices to compete; e.g., no legalized casinos because they might put racetracks out of business. Legalized marijuana might threaten our bourbon industry, which produces 95 percent of the world’s supply. But as part of the Bible Belt, Kentuckians are more likely to oppose legalized marijuana on moral grounds. Consider: Despite the fact that Kentucky has more barrels of bourbon aging than it does people [5.3 million v.s 4.3 million], only 33 of its 120 counties are wet.)

Anyway, back to fiction. The pot plan is why Avery is trying to buy up all that land and killing those who refuse his offers. His tense standoff with Raylan at Loretta’s was a highlight of the episode, and also illustrates Raylan’s depth of feeling for the place he claims to want to leave so badly: He can’t abide seeing someone buy (or steal) land that’s been in families for generations, that in many cases is all they have.

Each man seems pretty confident that he will come out the winner in the end. Boyd thinks he’s going to fool both of them. And they all seem to be seriously underestimating the ones who really hold the cards: the women.

The episode was bookended with closeups of Ava’s face – peaceful at the beginning and terrified at the end. Ava’s been in a tough place all season, of course, caught between Boyd and Raylan, but now she’s really scared. Why? Because now Boyd is talking about staying in Harlan, and she’s pretty sure Katherine Hale is onto her. That’s the same Katherine Hale who is robbing her former jeweler and conning her current lover in order to avenge her husband’s death. (“Smart of you, sleeping with him,” Ava tells her. “Can’t imagine he’d suspect the man trying to rob him is the woman underneath him.” Katherine, slyly: “Not always underneath.”)

But is Katherine toying with Ava, or is she testing her? Last week, Avery warned Ava that women who weren’t harder than men didn’t survive in this line of work. From Mags Bennett to Loretta McCready, we’ve seen a lot of strong women on this show. Katherine is clearly a survivor, and I suspect she realizes that Ava is, too.