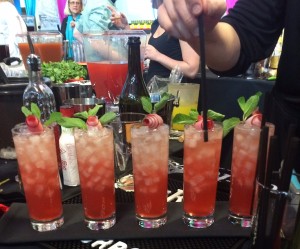 These Rosé Runner juleps were the creation of Martini Italian Bistro mixologist Colleen McCarthy-Clarke, who created a rhubarb syrup and fashioned rosebuds from rhubarb for the beautiful garnish. Her julep also included Four Roses Small Batch, five or six mint leaves, a squeeze of lemon, several dashes of rhubarb bitters and a topper of prosecco. This was the second consecutive win for Martini Italian Bistro, which will begin serving the julep on March 2. Watch McCarthy-Clarke in action here:

I was fortunate enough to be asked to judge the Rose Julep Contest again this year, and I was again impressed by the inventiveness – and stamina! – of the contestants: Micah Rondot of Against the Grain, for instance, made 400 of these ice spheres infused with Bourbon Barrel Foods’ Mint Julep Sugar for her Ramble on Rose cocktail! 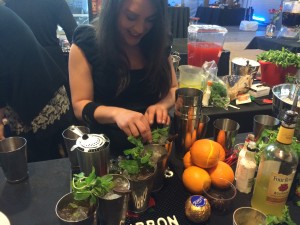 I also really enjoyed the Orange You Glad I Said Chocolate Mint? cocktail  from Saints Pizza Pub and Sky Bar’s Jennifer Jarvis and Bruce Jarrett, which took third place in both categories.