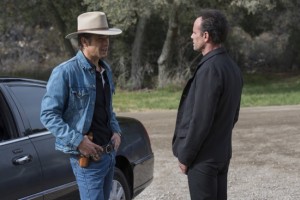 “Shall we lean in for a kiss?”

(SPOILER ALERT: DO NOT READ UNTIL YOU’VE WATCHED EPISODE 8, “DARK AS A DUNGEON.”)

Bourbon is a very versatile spirit, as “Justified” has amply illustrated this season: It is a perfect celebratory sip and a great way to start your day. Drinking it all night with someone can bring you closer together, and admitting you never developed a taste for it can positively ID you as the bad guy.

In Episode 8, “Dark as a Dungeon,” we saw a few more ways that bourbon can come in handy:

Raylan once again did not drink at Ava’s, but he did end up flushing out Ty Walker. I almost felt sorry for Ty. He sure went through a lot only to end up shot in the back – although as Raylan helpfully pointed out, “If you wanted to get shot in the front, you shoulda run toward me.” The verbose villain didn’t even get to finish his last sentence: “It wasn’t just the money. It was….” Was what? The great dental plan? 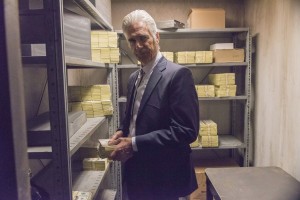 For Boyd, of course, it is all about the money. In a sly turn of events, after trying all season to crack the vault in Markham’s basement, Boyd was practically ushered into it as Markham counted out his $100,000 reward for giving up Ty Walker. That’s twice as much money as Ava was willing to accept for snitching, and she begged Boyd to take it and run. But the temptation of $10 million is too strong, just as I’m sure Raylan knew it would be.

Raylan also knows that Ava has confessed her role as a CI to Boyd, and that Boyd’s crew is blasting their way up to the Pizza Portal.

And so, as our final season flows inevitably to its end on a river of bourbon, the focus is firmly back on our three main characters, still trying to outrun their pasts but with wildly different degrees of optimism.

Boyd: “Don’t eulogize the past until the future gets its turn.”

Raylan: “In Harlan, the past ain’t behind you – it’s vertical. You dig down deep enough, you find another layer of horror.”

Ava: “The past and the future are a fight to the death.”

Who will survive? I tremble with anticipation.