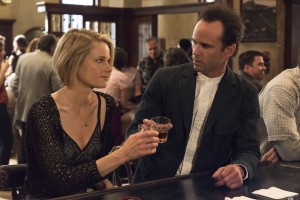 (SPOILER ALERT: DO NOT READ UNTIL YOU HAVE PARTAKEN OF EPISODE 9, “BURNED.”)

As with many “Justified” episode titles, this week’s has multiple meanings. First, of course, Ava realized that Raylan knows she is burned – that she’s confessed to Boyd she is informing on him. Raylan doesn’t take any immediate action, however, instead complimenting Ava’s dress. She, meanwhile, continues to play double agent by telling Raylan that Boyd plans to crack the Pizza Portal safe during Avery Markham’s party, above. It is more obvious than ever that while Ava may truly love Boyd, her real loyalty is to herself. Then she goes to the kitchen to start a fire that clears the restaurant.

Boyd gets burned by Zachariah, who clobbers him and chains him up directly underneath the dynamite’s lit fuse, where, he tells Boyd, “You’ll be buried by your own goddamn greed.” Indispensable Carl comes to the rescue, though, and he, Boyd and Wynn Duffy all make it out of the mine alive. (While we did not witness the fate of Uncle Z, we can pretty much assume that his time on earth is short.) The safe remains secure.

And why was Wynn in the mine shaft, you might ask? Very much against his will, he is working with Raylan after it was revealed rather anticlimactically (”You got me – I’m the rat”) that Wynn is the one who caused Grady Hale’s death. (One of my favorite scenes was Wynn’s acting out how the phone conversation might go to get more details of Boyd’s plan: “Hey, Boyd? Yeah, I know – super-weird! Anyway, could you tell me what time you are planning to blow up that safe, and who will be with you?”)

Raylan and Art encouraged Wynn to cooperate by literally turning up the heat – on his tanning bed  – and then threatening to inform Katherine of his treacherous ways.

Now, I had been thinking that Wynn was sweet on Katherine, but perhaps he is motivated more by fear – and wisely so. She proved that a Seabass is no match for a woman in a leather dress when she wasted Avery’s final “merc” with a gun hidden in her purse. How did Seabass, a trained killer, not see that coming? I saw it coming, and I just watch a lot of TV. Avery was impressed by her resourcefulness; I was impressed that she ordered up a cleaner to deal with splattered Seabass in French. Was the cleaner coming from Paris or Versailles? (Remember: That’s “Ver-SALES” here in Kentucky, y’all.)

Avery has a new henchman, and with his “No Country for Old Men” hairstyle and jittery Crispin Glover mannerisms, he’s scarier than the rest of them put together. Boon shows up to threaten Loretta, which sends her to Boyd (who is drinking his signature Elmer T. Lee with Ava in his bar). Loretta needs muscle to amp up her weed operation. Boyd says she can have it all, as long as she keeps “Harlan for Harlan,” and his reason is sound: “I’m a bad man, but Avery Markham is a real bad man.”

And so we all end up back at the Pizza Portal Party. Raylan sips on Blanton’s after requesting “the most expensive kind” of whiskey, since it’s on the house. (No, that’s not the most expensive bourbon in the world, but hey, it’s a pizza place owned by a guy who doesn’t like bourbon.) Raylan and Boyd seem equally startled when Loretta interrupts Avery’s big “I’m not a bad man; I came back here for love” speech with what seems to be her unofficial announcement that she’s running for mayor. Boyd’s not thrilled that she revealed him as her biggest supporter (”Have you ever heard that a whisper will get you further than a roar?”).

Honestly, the only one I’m sure will still be standing at the end is Wynn Duffy, who toggles between loyalties and locations with ease. As he observed to Boyd, “Home is wherever the RV takes me.” 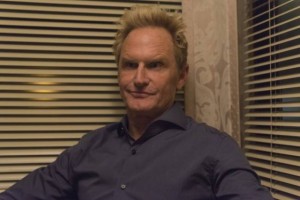