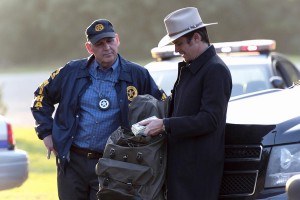 (SPOILER ALERT: Do not read until you have savored every drop of the “Justified” series finale, “The Promise.”)

Well. That didn’t go exactly the way I expected. But I mean that as a compliment, and along with Art and Raylan, I raise a glass of Blanton’s to commemorate a job well done. Thank you, “Justified,” for six years of splendid entertainment, particularly in this final season. Thank you for bringing us such beautifully complex characters, for making us laugh even in the middle of spectacular violence. Thank you for respecting the people of Kentucky. And most of all, thank you for always getting the bourbon right.

In the end, Raylan Givens did indeed leave Harlan alive, after narrowly avoiding death at the ring-bedecked hands of Boon in a much anticipated “High Noon” showdown. (Raylan’s hat took the bullet.) I had hoped that Loretta would have the honor of dropping our crazy-eyed, flowery talking shootist, but I was satisfied with the way it played out: As the mortally wounded Boon attempted to raise his gun to finish Raylan off, she stepped on his wrist and silently watched him shuffle off that mortal coil. Sometimes a whisper really does get you further than a roar. So long, Boon. You were with us for just five episodes, but you more than earned the right to be Raylan’s final foe. 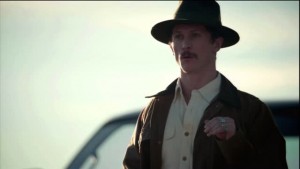 Ava also got out of Harlan, roaring away in Raylan’s car as he lay in the road with Loretta tending him. Her survival wasn’t a foregone conclusion, however. Ava began the final episode in the custody of one angry Avery Markham, who recalled what he had told her the first time they met: For a woman to survive in this life, she had to be tougher than the men.

“Hell, anyone who kills her husband, then puts a bullet in her fiance….” he continued, laughing without mirth. “My compliments on your grit. I’d say you have a bright future – assuming you have a future.”

Not willing to sell her life for $10 million, Ava called Uncle Zachariah. Of course she reached Boyd Crowder, who explained in a nice bit of understatement that Uncle Z couldn’t come to the phone right now. In another display of grit, Ava pretended to tell her uncle where to meet Avery’s men with the money, while at the same time reminding Boyd that without her, he’d never find it either. 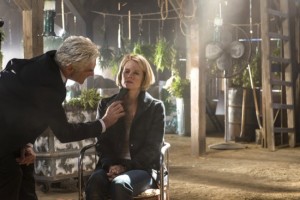 After escaping from the encroaching deputies by throwing lit sticks of dynamite at them (”Fire in the hole!”), Boyd arrived at the drying shed. He called Markham a bona fide stoner, Markham called him a hillbilly, they called each other’s bluffs and Boyd killed Markham and his two dirty cops. Then he pointed the gun at Ava. “Look at me,” he said. “Look. At. Me.” Click. Empty chamber.

And in walked Raylan. (I must mention the scene in which Art and Raylan entered the bar to “interrogate” the deputy who knew where Markham was holding Ava. Barkeep: “To drink in here, you need a badge or a pair of tits.” Raylan, with small smirk: “Art… show him your tits.” Art, deadpan: “Let’s start with the badges.”)

After six seasons of buildup, Raylan and Boyd were finally face to face in the inevitable showdown. And here is where the writers took the turn I was not expecting: Boyd wouldn’t pull. First, he said he had an empty gun. Raylan kicked another one to him. “I don’t care how it gets done, as long as it gets done,” he said. Hold up – Boyd wanted to ask Ava a question: “Why?”

“Honestly, Boyd,” she replied, “I put myself in your shoes and did what I thought you would do.” He gave her a look of grudging admiration and sorrow. And still he wouldn’t pull. “What’s it gonna be, Raylan?” 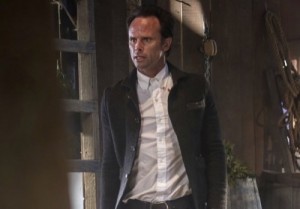 Raylan was shaking, he wanted this so badly. But in the very next scene, Boyd was being led out of the shed in cuffs. All three of our leads survived!

But only two of them really escaped. Four years later, Raylan is in Florida, wearing a new hat (Boon’s! ”I tried it on and it fit,” he told Rachel in a callback to the show’s second episode) and sharing custody of Willa with Winona, who has remarried. An envelope arrives from Rachel. Inside is a newspaper clipping about a pumpkin festival in California, and the woman in the photo looks a lot like…

Yes, it’s Ava, who was aided in her escape by… our man Wynn Duffy! As many had predicted, he got her past the roadblock dogs by driving the mobile getaway grooming van (”Down on All Fours: The Experts of Doggy Style”) that he had requested in the previous episode. And here comes surprise No. 2: Ava has a son, named Zachariah for “the only man in my life never wanted to get anything from me.” Awwww. Boyd can never know about him, she tells Raylan, because he would ruin the boy’s life, too.

After telling the tearful Ava that he won’t turn her in – “I said you’d be fine” – Raylan makes sure of that. He visits the prison where Boyd has returned to the pulpit (and where we get one final “Ha-HA: RAY-lan Givens!”).

Raylan shows him a falsified death certificate, saying Ava died in a car crash. Perhaps it was for the best, Boyd says. “She was trying to get out, but I just don’t think that’s possible.Sometimes I think the only way to get out of our town alive is to never have been born there.”

But Raylan got out, he adds. And why did he come back, when he could have mailed this information about Ava? It was the kind of news that should be delivered in person, Raylan replies. Boyd asks: Is that really the only reason?

And then we get the perfect ending:

“I suppose if I allow myself to be sentimental, despite all that has occurred, there is one thing I wander back to,” Raylan says, looking through the glass at Boyd. 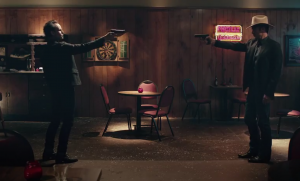 BONUS: Remember last week, when Boyd’s carjacking victim predicted someday people would sing songs about him? I was so sure that Boyd wouldn’t survive the finale that I wrote one. Seems a shame to waste it, so…

The Ballad of Boyd Crowder

Let me tell you the tale of the Outlaw Boyd Crowder

who dug in the mines long ago

They say that his face was as black as the coal

He dreamed of a life far away from the hollers

but his tactics made every man foe

They say that his hair was as black as the coal

Now Boyd Crowder, he turned on his friend Raylan Givens

and he wanted to lay that man low

How he claimed that he loved Ava so

but his teeth were as white as the snow.