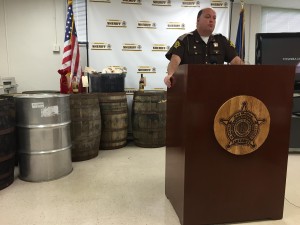 Franklin County Sheriff Pat Melton and some of the recovered bourbon. Photo by WUKY

Hoooo-eeee. Just when I was getting all sentimental about how there would be no “Justified” tonight, or ever again, we got ourselves a real-life Raylan-and-Boyd-worthy story right here in the Commonwealth of Kentucky. That’s right: The Case of the Missing Pappy has apparently been cracked.

Franklin County Sheriff Pat Melton announced at a news conference in Frankfort, Ky., that a grand jury has issued indictments against nine people in connection with the theft of large quantities of Pappy Van Winkle, Eagle Rare and Wild Turkey that stretch all the way back to 2008. The recovered whiskey was estimated to be worth more than $100,000, Melton said. The sheriff had said from the outset that this was “an inside job,” and he was right: Two of those indicted worked at the Buffalo Trace distillery and one worked at Wild Turkey.

Some of those indicted were charged with trafficking in anabolic steroids, Melton said. All nine were charged with engaging in organized crime as members of a criminal syndicate. The apparent Boyd Crowder was Gilbert Thomas Curtsinger, who authorities called the ringleader of the group. With 26 years in on the loading docks at Buffalo Trace, he knew the security provisions and how to bypass them, said Assistant Commonwealth’s Attorney Zachary Becker, who also appeared at the news conference.

Curtsinger’s wife and father-in-law were also charged, as were Christopher Preston, who also worked at Buffalo Trace; his son; and Wild Turkey worker Mark Searcy; and three other men. Authorities said the group had initially come together through softball games.

The discovery about six weeks ago of bourbon barrels that were determined to be from Wild Turkey in Curtsinger’s back yard led to the charges.

Attorney General Jack Conway appeared via video to tout the work of the Cyber Crimes Unit, which he said he created for just such cases. Sheriff Melton agreed that the unit was instrumental in helping to make the connections between the syndicate’s members. “I can’t thank them enough,” he said. “These guys have been working 10- to 18-hours days,” he said.

Melton said the public had also helped by providing tips. “How many people do you know who have a barrel of bourbon in their house?” he asked. “It just doesn’t happen.” When a reporter asked Melton, who seemed on the verge of tears at one point, why he was so emotional, the sheriff replied, “It’s just an exceptional case.”

More indictments are possible, but here’s another crime: While the sealed bottles of Van Winkle might eventually be returned to the distillery, the Eagle Rare and Wild Turkey in barrels will most likely be destroyed.