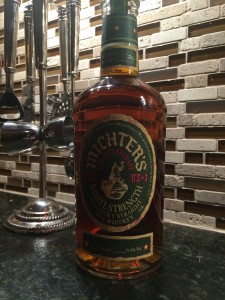 The story: This spring, Michter’s Distillery of Louisville, Ky., is releasing a limited number of bottles of its US*1 Single Barrel Rye at barrel strength, rather than the 84.8 proof of the original. “Whenever we would sample right out of the US*1 Rye barrels, we loved the whiskey,” Michter’s President Joseph Magliocco said in a news release accompanying a sample that Michter’s kindly provided me. “We thought that our loyal US*1 Single Barrel Rye customers would enjoy tasting some at barrel strength.” The highest proof barrel in this batch of Kentucky Straight Rye was 113, but most barrels ranged between 108 and 110.8. My sample bottle was 108.2 proof.

The aroma: Sweet, with caramel and vanilla notes more common to bourbon than to rye, underscored by a bracing evergreen.

The taste: Enters cool, with caramel on the front; warms up mid-palate with pleasant cinnamon spice and finishes fairly softly with a hint of white pepper.

The verdict: This is a smooth, drinkable rye whose taste profile belies its proof level: very little alcohol burn and mild spice.