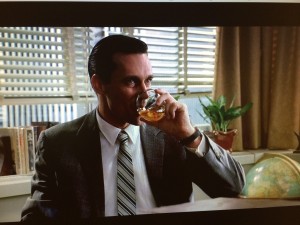 Here, Don is enjoying whiskey neat in his office, poured from a bottle kept in that awesome globe bar.

When we first met Don Draper, in the very first scene of “Mad Men,” he was ordering “another one of these – an Old Fashioned.” And so whatever happens in tonight’s series finale, I will be toasting its run with that very same drink. “Man Men” has nearly driven me to drink in these last episodes, as it has gotten darker and darker. I don’t believe series creator Matt Weiner will off Don by having him plunge from the top of the McCann-Erickson building; that would be too literal. But I can see him “offing” Don – who, after all, is already dead – by having our leading man return to his Dick Whitman identity. We shall see in about 2 1/2 hours. That gives you plenty of time to gather the ingredients for your own Old Fashioned.

There are several variations. In its original incarnation, it was called simply a whiskey cocktail, and it consisted of a little sugar, a few dashes of bitters, whiskey and a twist of lemon over ice. That’s how purists still make it. The drink became known as the Old Fashioned around the turn of the 20th century, and that’s when it started to be tarted up with fruit on the rim of the glass. At some point after Prohibition, bartenders started muddling the fruit into the drink. By the 1970s, where we are now in “Mad Men,” the drink had reached its lowest point, some say.

“It had to be among the most disgusting drinks I encountered when I first tended bar,” the cocktail historian Anistatia Miller told The New York Times in 2012. “Orange, lemon and maraschino cherry muddled with sugar and bitters, then topped with ice, whiskey and soda. That’s how I was taught to make them. And for the life of me, I couldn’t believe anyone would drink them.”

The drink was pretty much off the menu when “Mad Men” premiered in 2007. But cocktails were making a resurgence, and having a suave guy like Don Draper sipping them didn’t hurt. The Old Fashioned is once again commonplace in most bars, although the execution of the drink varies. I like having a bit of fruit in mine, but I’m not a big fan of muddling. And I don’t add club soda, or any water beyond what is needed to dissolve the sugar a bit. The Old Fashioned is about the bourbon. Below is my recipe. Cheers to the Old Fashioned, to Don Draper and to “Mad Men.”

2-3 dashes of bitters (I like to use Regan’s Orange Bitters No. 6, which gives a nice hint of orange without being too sweet)

A couple drops of water

Put the sugar in an Old Fashioned glass. Moisten with the water and bitters. Squeeze in a bit of orange and throw in the peel. Add the bourbon. Stir. Add a couple cubes of ice and stir again. Garnish with an orange or lemon slice. If you really want a cherry in there, I recommend Woodford Reserve bourbon cherries.