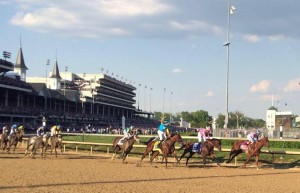 American Pharoah jockey Victor Espinoza celebrates the horse’s Kentucky Derby win. Yes, I was there. No, I didn’t bet on him. Never bet the favorite.

The racing world will once again hold its collective breath this evening when American Pharoah becomes the 14th horse to run the Belmont Stakes having first won the Kentucky Derby and the Preakness and hoping to be the first Triple Crown winner since Affirmed in 1978. He may be the favorite (3-5 at 2:30 p.m.), but the odds are against him: At 1 1/2 miles, the Belmont is the longest race of the Triple Crown, and horses that haven’t run the other two legs have an automatic advantage.

I’ll be pulling for American Pharoah (even though his name is a misspelling), and while I am I’ll be drinking an appropriate cocktail: a Knob Creek Horse’s Neck with a Kick. A cocktail that’s said to have been around since 1895, the Horse’s Neck originally had two ingredients: bourbon and ginger ale. The “kick” comes from substituting ginger beer. American Pharoah won the Derby by a head and the Preakness going away; all it takes tonight is a nose – or a Horse’s Neck.