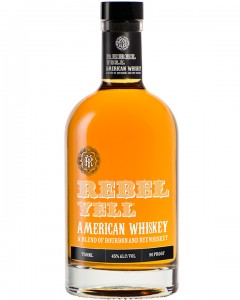 The story: Rebel Yell as a brand name dates to 1849, when it was distilled at the famed Stitzel-Weller operation (and named by Louisville Mayor Charlie Farnsley). After several ownership changes, the brand was purchased by the David Sherman Corp. of St. Louis, which is now doing business as Luxco. The brand’s packaging and label were recently updated, and late last month Luxco released two new variations: Rebel Yell American Whiskey and Rebel Yell Small Batch Rye. “Rebel Yell is bridging the gap between its proud heritage and modern tastes with these two new brand innovations,” brand manager Fletcher Buchman said in a release. Rebel Yell American Whiskey combines 50% of Rebel Yell Kentucky Straight Bourbon with 50% straight rye. Luxco kindly sent me a sample of each of these new offerings. Read on for my notes on the American Whiskey, and find my impressions of Rebel Yell Small Batch Rye here. (And you didn’t even know I did impressions.)

The taste: Both the American Whiskey and the Small Batch Rye are a very light golden color, reflective of their relatively short time in the wood, and the flavor of the American Whiskey is also indicative of that. There’s a bit of buttery softness and corn up front that is quickly overcome by spice that starts mid-palate and continues down the throat.

The verdict: It’s not awful, but it’s not remarkable; it’s blended whiskey. Nothing much to Yell about here.