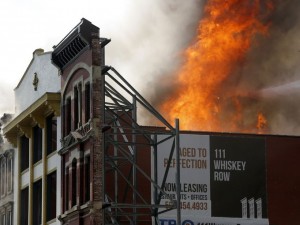 Photo by The Courier-Journal

It’s been a tough week for the bourbon industry here in Kentucky, and it’s only Wednesday. First, a fire that broke out on Monday afternoon and took 85 firefighters to control heavily damaged three of the buildings in the 100 block of West Main Street, the area known as “Whiskey Row.” The damaged buildings, whose ultimate fate remains unknown, are adjacent to buildings that Brown-Forman intends to develop into an Old Forester Distillery and Visitor Experience. In a letter to employees, Brown-Forman officials said those plans will proceed, with a groundbreaking ceremony scheduled for later this summer. It is hoped that at least the facades of the other three buildings can be saved. All of the buildings were constructed between 1852 and 1905. 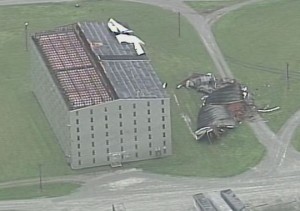 Then on Tuesday, strong winds blew the roof off of one warehouse at Heaven Hill’s complex in Bardstown, Ky., and partially removed the roof from a second. Warehouses O and P each hold 20,000 barrels of whiskey, mostly bourbon – all of which was left untouched. “It would take a hell of a wind to move those 500-pound barrels!” noted Larry Kass, director of trade relations for Heaven Hill.

Unlike Buffalo Trace, which released a special Tornado Surviving edition of its Col. E.H. Taylor bourbon after a 2006 storm ripped the roof off Warehouse C and left barrels open to the elements for weeks, Heaven Hill plans no special bottling, Kass said. “We should have the warehouses repaired in 2-3 weeks,” he said. “We will put a temporary cover on them in the interim. They won’t be exposed very long, we hope!”