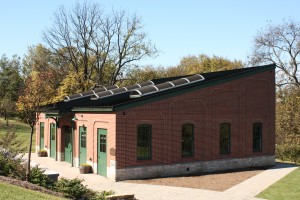 This week, Buffalo Trace Distillery released some of the results from its first bourbon barrel aging experiment inside Warehouse X, the experimental warehouse built in 2013 that allows for specific atmospheric variables to be tested in four individual chambers, plus one open air breezeway. This first experiment, which lasted for two years, focused on how or if natural light affects bourbon and yielded 3.5 million data points. Analysis scientifically proved one long-held distillers’ theory and disproved another, at least in part. Before we get to the results, here’s how Master Distiller Harlen Wheatley set up the first experiment: 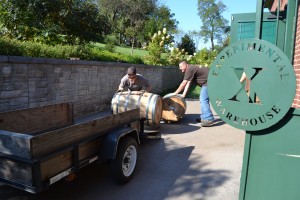 Workers remove barrels from the first experiment in Warehouse X. Photo courtesy of the distillery

Over the two years of the experiment, the barrels in the open air breezeway experienced a fluctuation of temperatures ranging from -10 F to 105 F, likely some of the greatest temperature variance any bourbon barrels have ever experienced. The pressure inside these barrels varied from -2.5 psi (pounds per square inch) to 2.5 psi.

The Buffalo Trace team’s analysis revealed a correlation between light and psi and upheld the distillers’ theory that more heat equals higher proof.

However, another popular theory regarding “honey barrels,” or those next to windows in a standard warehouse that are typically favorites with distillers, was disproved, at least in part: The amount of light that a barrel is exposed to doesn’t affect the color or the proof of the bourbon inside. 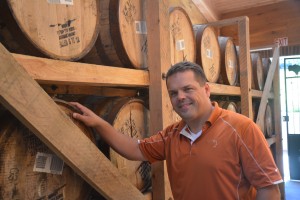 However, Wheatley added, “that doesn’t mean that honey barrels don’t taste a little bit better — perhaps because of other factors than natural light. We did prove factors like temperature, pressure, humidity and air flow all play a role in the end result.”

In Buffalo Trace’s next planned experiment, also expected to last two years, the chambers will experience different temperature variations. Chamber One will remain at 10 F above the temperature as the outdoor breezeway. Chamber Two will be at a consistent 80 F. Chamber Three will be at 55 F. And Chamber Four will be kept 10 F cooler than the breezeway temperature.