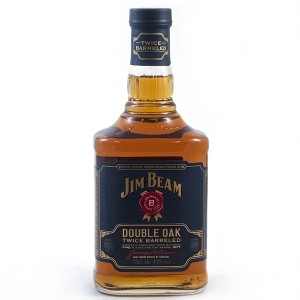 86 proof; 4 years, then aged “to taste” in second charred barrel

The story: Jim Beam Double Oak, the latest new expression from the brand, is first aged for four years in charred American white oak barrels, then poured into another freshly charred oak barrel to mature for a second (undisclosed) time. This added interaction with the wood, the company says, “results in a liquid intense in flavor, smooth in taste.” The folks at Beam kindly provided me with a sample for this review.

The aroma: Caramel, vanilla, hint of cinnamon and a distinctive musky wood note – sort of like the inside of a cedar chest.

The taste: Cool on entry with caramel and corn sweetness that mostly hugs the sides of the tongue, becoming spicier near the finish, where the oak really takes over and there is a note of dark fruit. Lots of tannin, but no bitterness. Finishes on the dry side.

The verdict: Jim Beam Double Oak follows the similarly named and produced Woodford Reserve Double Oaked. But while I enjoy either Woodford product about evenly, the extra time in the second barrel really elevates the Beam, giving this much more body, complexity and character than Jim Beam white. You could argue that that’s damning with faint praise, but I don’t mean it that way. This is a solid, drinkable bourbon at a good price point.