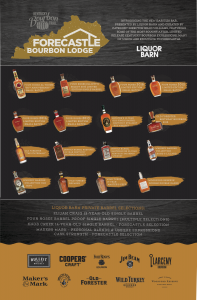 The Forecastle Bourbon Lodge, the Kentucky Bourbon Trail outpost of the Forecastle Festival (July 14-16 at Louisville’s Waterfront Park), will be serving up some of the most sought-after Kentucky Bourbon limited editions this year at its new Rarities Bar, presented by Liquor Barn and curated by category director Brad Williams.

The Rarities Bar will also debut unique blends crafted by Williams and Forecastle Founder JK McKnight, available for sample only at Forecastle and for purchase at select Liquor Barn locations.

The Rarities Bar will include the following Kentucky Bourbon Trail offerings:

All Rarities Bar offerings will be released at specific times throughout the festival, available until limited quantities are depleted. A full schedule of releases will be shared prior to the festival; those with Bourbon Lodge memberships, currently available at ForecastleFest.com, will have early access to the release schedule.

The 15th annual Forecastle Festival, which has grown to attract more than 1.5 million visitors per year, will feature dozens of performers including LCD Soundsystem, Odesza, Weezer, Cage the Elephant, Spoon, and PJ Harvey.