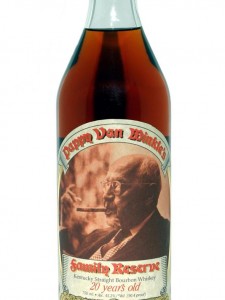 As I write in my new book, “Barrel Strength Bourbon,” the thirst for hard-to-find Pappy Van Winkle has reached such epic proportions that empty Pappy bottles are being sold online for $200 — often purchased by counterfeiters who refill them with less expensive bourbon, reseal them and sell them on the secondary market. Now, thanks to advances in technology, some counterfeiters are printing labels and passing their fake Pappy off as the real thing.

The Van Winkle family and their partners, Buffalo Trace Distillery, have spent over half a million dollars over the past year alone in an effort to crack down on counterfeiters and announced the first successful prosecution today: a New York resident who pleaded guilty to selling two bottles of fake Pappy Van Winkle bourbon for $1,500 last year. The defendant will be sentenced in January 2018.

“Avoid buying any bourbon or whiskey, especially the highly sought after ones, from anyone in the secondary market, which includes online private sellers, or in these social media groups that claim to offer genuine products,” said Mark Brown, president and chief executive officer of Buffalo Trace Distillery.

Julian Van Winkle, president of Old Rip Van Winkle Distillery, cautions that if you see a bottle that does not have a matching face label with a capsule on top with the proper corresponding color, that’s a sure sign of fraud. “The old adage of ‘If it seems too good to be true, it probably is,’ definitely applies here,” Van Winkle said.

The resale of genuine, untampered-with Van Winkle product on the secondary market is also illegal.

If you see suspicious bottles for sale, you’re urged to call local law enforcement or your state’s Attorney General or Alcohol and Beverage Control Board.

2017 Buffalo Trace Antique Collection: The Bourbons
Are you right-nostriled or left-nostriled?