Hello and welcome to International Women’s Day. Isn’t that great? We actually get a whole day dedicated to us! OK, I’m being petty. Women’s Day falls within Women’s History Month, and that’s 31 days. To celebrate, Diageo, the international spirits company that owns the Scotch brand Johnnie Walker, launched a limited-edition version of its Black Label with a woman wearing the iconic top hat instead of a man, and dubbed it “Jane Walker.”

Johnnie Walker vice president Stephanie Jacoby, who worked on the campaign, and who is apparently a woman, explained the reasoning thusly: Scotch as a category of spirits “is seen as particularly intimidating to women. … [Jane Walker] is a really exciting opportunity to invite women into the brand.”

Look, I don’t drink Scotch, but it’s not because I’m intimidated. It’s because I can’t get past the Band-Aid taste of peat. But if I did want to drink Scotch, this campaign wouldn’t encourage me to pick up a bottle of Jane Walker; it would have the opposite effect. It doesn’t feel like an invitation; it feels like pandering. Bourbon-drinking women often encounter the same kinds of pandering. That’s what happens when marketers assume they know what women want: lower proof bourbon; sweet cocktails; foofy drinks.

As a member of Bourbon Women, however, I’ve led or participated in numerous blind tastings with our members, and in every single case, the women preferred the highest-proof bourbon. We do enjoy cocktails, but only when the spirit shines through. 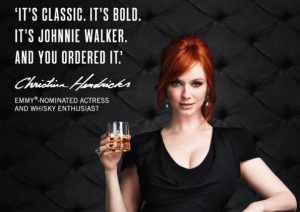 Ironically, in 2014, I cited Johnnie Walker as the example that Woodford Reserve should have followed when it aired its first-ever television commercial during an episode of “Mad Men.” The commercial was narrated by a young woman in voiceover. When she sees a man drinking bourbon, she said, she knows that he’ll be the kind of man who will build her a bookshelf. Not only that, “he’ll let me use the saw – and not think it’s cute when I don’t know how to use the saw.”

Why not look to the Johnnie Walker ads featuring “Mad Men” actress Christina Hendricks, I said then. She is firmly in charge, and the ad copy is inclusive: “It’s classic. It’s bold. It’s Johnnie Walker. And you ordered it.”

At the Oscars this year, host Jimmy Kimmel noted Hollywood’s cluelessness when it comes to women by saying, “We made a movie called ‘What Women Want’ – and it starred Mel Gibson.”