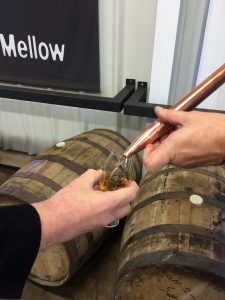 As the demand for limited-edition bourbon grows, many distilleries are now offering the most limited edition of all: a single barrel that is hand-picked by a liquor store, restaurant, or bar owner and bottled exclusively for that establishment.

Along with two other bourbon writers, Susan Reigler and Michael Veach, I have had the honor and privilege of participating in a number of these selections as a member of the Bourbon Board of Directors for Party Mart, an independently owned store in Louisville.

The procedure at most distilleries is very similar. We arrive at the tasting bar, usually located right in the barrel warehouse, where glasses, water, and crackers or chips have been arranged at each place. Three or four exceptional barrels, pre-selected by the Master Distiller, lie on their sides, bungs facing up. (Four Roses, which, with two mash bills and five yeast strains, has 10 recipes, pulls one of each.) The distiller, or a brand representative, removes the bung with a bung knocker and a chisel. Then, using a long copper “straw” called a whiskey thief, we take turns drawing bourbon
from each barrel and depositing it either directly into the glasses or into a decanter that the distillery officials pour into the glasses.

We nose and taste each sample, taking notes on each and discussing our reactions. We are looking for superior bourbon, of course, but we are also on the hunt for a sample that has a taste profile that is distinctive in some way. Why would you pay extra for a single barrel of Old Forester that
tastes exactly like Old Forester? 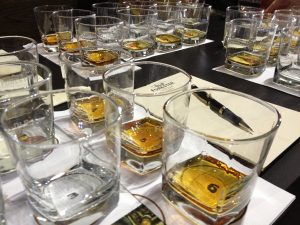 This exercise illustrates—dramatically in some cases—that no two barrels of bourbon are exactly alike, even barrels that were filled on the same day and aged for the same length of time right next to one another. Each one contains at least some dimension of its particular brand—the fruit note, maybe, or the spice—but not the entire spectrum. It’s sort of like taking a step back from a bourbon and meeting its parents.

We first sample at barrel strength. If our selection will be gauged to the brand’s usual proof for bottling (for example, 90 proof for Buffalo Trace), we then add a few drops of water and taste again. It’s fascinating how this can alter the flavor; in a few cases, the addition of water has prompted us
to change our selection. The winning barrel (or barrels) is marked, dumped, and bottled with either a special “private selection” label or tag attached (some with our names on them, which is pretty darned cool), then delivered to the store in a couple of months.

An entire barrel can cost anywhere from $5,000 to upwards of $15,000, depending on the distillery and the particular bourbon or whiskey purchased. The yield varies from barrel to barrel, but a good ballpark estimate is 150–250 bottles per barrel. The cost is worth it, Party Mart’s Jerry Rogers says: “When you’re in retail, you’re selling the sizzle, not the steak. My Maker’s Mark is the same as everyone else’s. The single barrel program gives us the opportunity to do something different—something that separates us from everyone else.” 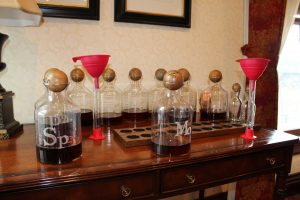 Speaking of Maker’s Mark, that distillery’s new private barrel program, which began in November 2015, is unique. Rather than choosing a barrel, we “built” one. The program is designed to replicate the process that Bill Samuels Jr. followed to create Maker’s 46, which spends an additional nine weeks in a barrel to which French oak staves have been added. In January 2016, when we traveled to Loretto, we were just the 20th group to participate.

Over the course of several hours, we learned about how wood affects flavor by tasting samples that had aged in five types of finished oak, each accentuating a different note found in Maker’s Mark: Baked American Pure 2, Seared French Cuvée, Maker’s 46, Roasted French Mocha, and Toasted French Spice. 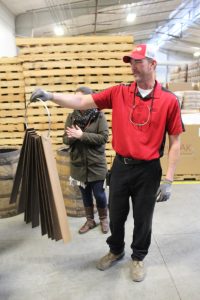 Using round wooden chips representing the finishes and a board with 10 slots drilled into it, we came up with different barrel recipes, if you will, which the Maker’s Mark folks created for tasting by adding those percentages to a graduated cylinder. Most groups create five to seven blends; we made six before choosing our winner: one Seared French Cuvée stave, three Maker’s 46s, five Mochas, and one Toasted French Spice.

In the warehouse, a worker removed the head of a barrel and produced a large metal hoop onto which we hung our selected staves. The barrel was once again sealed; we signed it; and another employee filled it with mature Maker’s. Several months later, the bottles arrived at Party Mart. Our Private Select had the smoothness of all Maker’s Mark, but with a prominent chocolaty mocha flavor all its own. The board member who built it must have one great palate (she said modestly).

— From “Barrel Strength Bourbon: The Explosive Growth of America’s Whiskey” by Carla Carlton