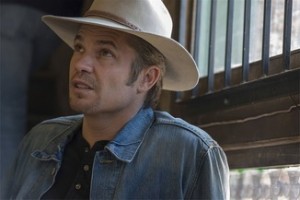 Whatcha lookin’ for, Raylan? Some whiskey, maybe? This week’s episode of “Justified” was titled “Raw Deal,” and that’s about what it was for bourbon fans. There was a blink-and-you’ll-miss-it shot of Maker’s Mark being poured at a bar (I had to go back and pause the DVR to be sure), and a pretty sweet offer of Blanton’s to Allison from Raylan, which she did not take him up on. That’s it.

I’m feeling thirsty. But let’s put our disappointment into greater context with this quote from Boyd Crowder, who even in the face of a seemingly dire situation has the presence of mind to pull out the Kahlil Gibran: “For what is it to die but to stand naked in the wind and to melt into the sun?”