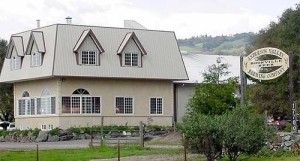 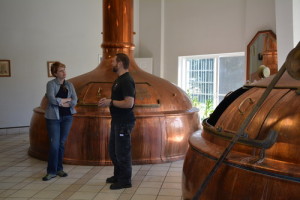 Anderson Valley Brewing was founded in 1987, near the beginning of the craft beer movement in the U.S., in a 10-barrel brewhouse. It’s now housed in a three-story brewhouse, where the centerpiece is the four copper brew kettles (two are pictured above) that were rescued from failing German breweries. The brewery also has its own bottling line. And in one sweet bourbon-scented room, Wild Turkey barrels filled with beer are stacked to the ceiling. Anderson Valley Brewing was particularly lucky to partner with Wild Turkey when it did, Fal said, because bourbon barrels are increasingly hard to come by. 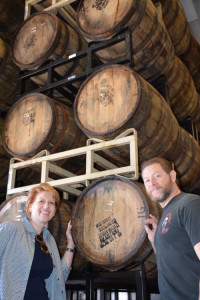 The most interesting thing I learned is that Anderson Valley has to age two batches of stout in each barrel and mingle those results for one bottling; there is still so much whiskey in the wood that the first-use batch would be too strong, both in flavor and alcohol content. 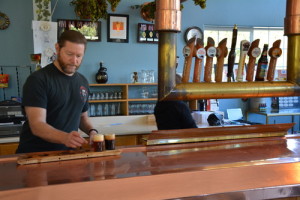 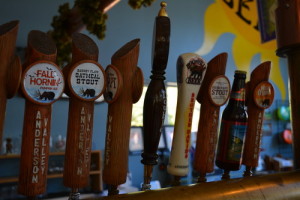 Fal also treated us to a taste of Blood Orange gose, which he said some refer to – and rightfully so – as a “beer-mosa.” 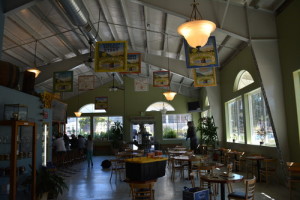 I want to thank Fal again for spending so much time with us, and I have to agree with Wild Turkey Master Distiller Jimmy Russell’s assessment that Anderson Valley is making “premium craft beers.” The collaboration between brewery and distillery seems meant to be. As if to underscore that point, as we drove the winding road away from the brewery we had to stop to allow three birds to cross. Wild turkeys.

(Top photo, AVBC website; all others taken by Chad Carlton)