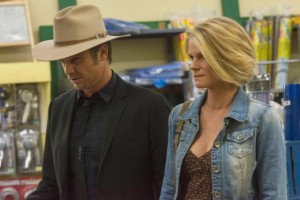 Ava, Ava, Ava. Slow down, girl. I can understand how much she wants out of the perilous situation in which she finds herself, but her method tonight aplexed me. She’d have been in real bad trouble if good ol’ Constable Bob (Patton Oswalt, below) hadn’t stepped in with his badge and balls like Death Stars (and his handy taser) to help Raylan get her away from Limehouse’s man Errol. But now what? Is Limehouse just going to forgive and forget?

And what about that kiss? Is Ava just playing Raylan now, too, or does she still really feel something for him? Does Raylan know he’s being played, and if so, does he really care? Does he even remember he has a baby?

Another guy taking some volts for Ava: Albert Fekus, the guard whose recanted testimony got her out of prison. He held up under Wynn’s cattle prod (with some additional prodding from the U.S. Marshals in an adjoining room), but it’s obvious that Katherine is suspicious: “I like Ava. I’d hate to have to kill her.”

Avery Markham is increasingly aggravated by his associates’ failure to buy up Harlan and wants to know who’s behind the issue. Choo-Choo’s “starter tap” took Calhoun out of this world before he could reveal anything, but it has to be pretty obvious, doesn’t it? There’s only one native Big Bad in Harlan.

And that bad guy has a new plan for getting to Avery’s money in that safe at the Pizza Portal. He’ll come in the back way, through a long-abandoned mine shaft. For guidance, he turns to Ava’s uncle, Zachariah Randolph, who is not a big fan of the Crowders after Bowman Crowder’s treatment of his niece. As a peace offering, Boyd brings our one bourbon sighting of the night: a bottle of Ancient Ancient Age 10 Year. While not the most expensive bottle on the shelf, this is a fine bourbon – and a rare one now that Buffalo Trace has stopped producing it. (You can still buy Ancient Ancient Age 10 Star.)

But it’s not as effective as a $10,000 wire transfer – and, perhaps, the chance to see the end of Boyd. Built-up methane causes a (non-lethal) blast when Boyd’s boys try to open the seal, and who knows how stable that shaft will prove to be. Boyd had best remember this line from “Justified” favorite “You’ll Never Leave Harlan Alive”:

And you spend your life digging coal from the bottom of your grave.