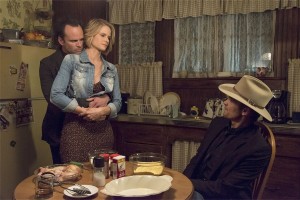 Just another happy meal for Boyd, Ava and Raylan. Photo/FX

(SPOILERS AHEAD. DO NOT READ UNTIL YOU HAVE WATCHED EPISODE 6, “ALIVE DAY,” UNLESS YOU WISH TO BE ENLIGHTENED PREMATURELY.)

An Alive Day is the anniversary of a brush with death, particularly at war. In this week’s episode of “Justified,” we learned more about Choo Choo’s Alive Day (which, unfortunately, he will no longer be celebrating); saw Boyd have an Alive Day incident of his own; and watched the snares tighten around several characters who are likely to have Death Days before this is all over.

I’m still hoping that one of them isn’t Ava, but has a Southern front porch ever looked so foreboding as when Boyd stepped onto hers knowing that Raylan was inside the house? This first scene was all kinds of fun as the two men sized each other up, with Boyd taunting Raylan (“a future for us and whoever we might bring into this world”? Really?), Raylan employing that patented Cheshire cat grin and Ava literally in the middle.

The kitchen was the only place we had a real bourbon sighting – Buffalo Trace, poured by Boyd and declined by Raylan. But there was another nice Kentucky reference when Boyd asked Ava if she’d remembered the Henry Bain sauce and she replied, “No point in having fried chicken without it.” The sauce, made with chutney, ketchup, chili, Worcestershire and steak sauces, was created in the late 1800s by the head waiter at Louisville’s Pendennis Club (learn more about that here) and is typically used on steak or prime rib, but who am I to argue with Boyd?

We learned more about Ava’s past in a conversation with Uncle Zachariah. Her daddy died in the dark following a mine collapse, Uncle Z considers seeing her to be “a tonic,” and he doesn’t trust Boyd any more than he trusts any Crowder. That is borne out later when he tries to kill Boyd by boobytrapping a vertical shaft in the mine that leads to the Pizza Portal. When Boyd doesn’t plunge to the bottom, Zachariah pulls him out, only to push Mr. Handsome in later after he discovers the trap. Side note: The boys don’t have to worry about headlamps down there; Boyd’s teeth will light the way.

In other criminal capers, Avery Markham didn’t take kindly to finding out from Raylan and “Sidekick” (if looks could kill, this season would be shorter) that his boys had murdered Calhoun. And he really didn’t like Ty’s hesitation about dispatching Choo Choo when the big guy waffled on killing Caprice, the prostitute who’d seen him and Seabass at Calhoun’s office and the only person who had been nice to him since that tank explosion in the Sandbox forever altered his brain. Markham’s crack team is falling apart (as Raylan so eloquently put it, “Wonderful things can happen when you sow seeds of distrust in a garden of assholes”). In a shootout with Raylan and Tim (who seemed off their game here), Ty and Choo Choo are both wounded, Choo Choo mortally so. 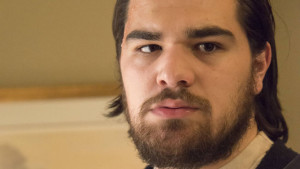 He drives his car onto the tracks for a poetic death by train, but since this is the Elmore Leonard-inspired “Justified,” the train stops just short of his car and he just bleeds to death. Cheers to actor Duke Davis Roberts, who gave such dimension to what could have been a one-note character. Bye-bye, Choo Choo. I’ll miss the way you talked, like you had a mouthful of chew. Chew.

Avery also proposed to Katherine in this episode, in the same conversation in which he said he believes she was the rat who turned on her late husband. (I wonder if he got that big ring at the jewelry store where Katherine took Ava, and if he actually paid for it?) Is this a case of keeping your friends close and your enemies closer? Can two criminals really find happiness together?

It sure didn’t look good for our two other larcenous lovebirds in the last scene. Boyd took a call from Limehouse, who asked if he knew what Ava had been up to, besides frying chicken. Is her goose cooked? Like I said, I sure hope not. But one way or another, it looks like she’ll soon be free of the bullshit burdens of Southern hospitality.