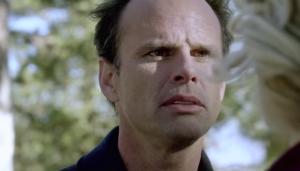 (SPOILER ALERT: DO NOT VENTURE FURTHER UNTIL YOU’VE WATCHED EPISODE 7, “THE HUNT.”)

Oh, “Justified.” You get a lot of Kentucky things right, but you get so many so wrong. This week there were some of both.

Right: Pappy Van Winkle 20-year-old would indeed be a bourbon you’d stash away to celebrate a special occasion.

Wrong: There was no Pappy Van Winkle warehouse fire in 1995. There was a big fire in 1996 at Heaven Hill that destroyed that distillery and seven warehouses, creating a river of fire that flowed down into the creek that supplied the distillery and setting it ablaze for a time. In 2013, someone did steal 65 cases of Pappy 20, worth more than $26,000 retail and who knows what on the secondary market, from Buffalo Trace Distillery. The case remains unsolved.

Right: Drinking Pappy is like “drinking silk,” as Boyd puts it.

Wrong: You do not shoot Pappy. You savor it.

Right: Boyd’s parents would likely have had a cabin that he would use for hunting.

Wrong: It would not be in California. Those shots of the “Kentucky” forests really take me out of the show for a moment. The cabin would also not be in Bullittville, Ky., which doesn’t exist. There is a Bullittsville, Ky., in Boone County, about a four-hour drive from Harlan.

Right, maybe: Boyd could be hunting razorback hogs, but it would be unlikely he’d find one that quickly in Kentucky. They are more prevalent in places like Texas. The Razorbacks that Kentuckians are more familiar with are the ones who come here from Arkansas to play the Kentucky Wildcats. (The lack of any mention of the Cats is another misstep for this show; UK basketball is a religion in Eastern Kentucky. Maybe that’s some NCAA regulation?)

Wrong: There is no wild hog season in Kentucky. If you find ’em, you can shoot ’em year round.

Right: Woodford Reserve would indeed have been a good bourbon over which Boyd and Johnny could have hashed out their differences. SNL used Woodford in its “Bourbon Summit” cold open earlier this season.

Wrong: We all know Boyd would still have killed Johnny.

But he didn’t kill Ava, even after she blurted out that she was a snitch and had sold him out following their increasingly tense series of exchanges about commitment, trust, loyalty and the way a man should treat a woman. (Ava: “Are you going to hit me over the head with this bottle like Bowman would have?” Hell, no, Ava – that is Pappy 20!) Turns out Boyd was almost relieved that Ava is working as a CI for Raylan – he was worried she was sleeping with him. If that was the case, Boyd said, handing her his gun, she could just shoot him right there.

Of course she didn’t, and they renewed their love for each other… and then we found out the magazine had been empty. Uh-oh.

In other developments, Raylan and Winona also seemed closer than ever (and should have tried giving that baby some Pappy); Art toyed with Markham, who is rapidly losing flunkies; and Ty Walker dug a bullet out of his own shoulder and gunned down two EMTs. I’d write more, but it’s been SUCH a day.