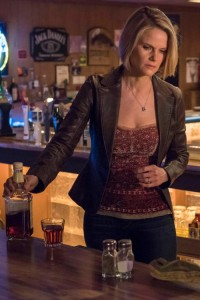 Ava and her liquid courage. Photo/FIX

(SPOILER ALERT: Do not read until you have watched Episode 10, “Trust.” Trust me.)

There were a couple of shots in this episode, but let’s get to the big one first: AVA SHOT BOYD. I did NOT see that coming, you guys. Neither did Boyd – or Raylan, even though you could tell he figured she was up to something on that strained-but-still-flirtatious ride to the meeting place. Ava still has plenty of feminine wiles, but rather than trust they’d be enough – again – she instead chose to lift Boyd’s own gun and use it on him.

Boyd was shocked – “Baby?” – and Raylan was impressed. But really, Ava had no good choices anymore. She knew she couldn’t completely trust Boyd, and Raylan had just told her that even if she led him straight to her man and his millions, she was going back to prison because Vasquez insisted on, you know, following the law or something.

But as sorry and as impressed as Raylan might be, he can’t just let Mrs. Ofay ride off into the sunset with her $10 million. (”Ofay” is a disparaging West African word meaning “white people” – Limehouse does have a sense of humor.) “I’m gonna come after ya,” he told her almost regretfully. And she, with the same elan that Han Solo employed in similarly perilous circumstances in “The Empire Strikes Back,” replied with the same line of dialogue: “I know.”

Poor Boyd. After an entire season – series, really – of scheming, he finally got the money he needed to escape from Harlan, only to be shot down mid-celebration by the person he had expected to escape with. In the end, he trusted Ava too much and respected her too little. Plus, she had been fortified by several glasses of bourbon – first, Elmer T. Lee with Boyd and then Ancient Age without him, when he went into his office to confer with Limehouse. (Limehouse enjoyed a swig from a pint in his pocket that I’m darned if I could identify.)

Boyd’s not dead, but where he is might be even worse: wounded, betrayed, broke (he gave that entire $100,000 “reward” money to Limehouse for the escape package) and on the wrong side of both Raylan Givens AND Avery Markham and Katherine Hale.

There was a lot of broken trust in this episode. Boyd “served up” Earl and Carl, his most loyal lieutenant, by using them as decoys for the Marshal’s Service. After using Katherine as bait for Markham, Boyd couldn’t resist telling him that he, too, had been betrayed. I was as surprised as Katherine that Avery paid the ransom anyway. He must really love her… although I didn’t like the way he smiled at her after she asked, “So are you going to kill me?” (Side note: Where do bad guys get those cool duffel bags they always have for toting lots of guns or bundles of cash?)

Boyd may be looking, but he doesn’t see what’s coming. Photo/FX

In the night’s second-most shocking moment (at least to me), Mikey turned on Wynn Duffy, handcuffing him to the table in the RV and leaving Katherine a voicemail about having some interesting information. Is this really a result of Mikey’s “moral code”? Wouldn’t his loyalty be to Wynn? I am particularly concerned about Wynn’s fate because I have wagered a bottle of Blanton’s that he survives the series. C’mon, you tan cockroach – you can do it!

The only real show of loyalty we saw was Boon’s (purchased) fealty to Markham. “I do what you pay me to do,” he said cheerfully. Unfortunately, this week that included plugging Loretta’s great-aunt, who, aside from the fact that her preferred pour was single-malt Scotch, was one of my all-time favorite Harlan residents. “You think I don’t know who you are?” she spat at Markham. “Not your name. Who you are. What you are.”

Avery seems to be growing weary of what he is, and of the tremendous and unexpected trouble it has been to work this little land deal. “Ever notice how the necessities of our line of work weigh heavy on your conscience?” he asked Boon, who replied that as far as he could tell, “the sweet spot is either to be poor enough you can’t afford to have one, or rich enough to hire someone to carry the weight.”

How great would it have been if Loretta’s aunt had blown away Markham’s last hired man when he opened her front door?

But then Boon wouldn’t get his chance to face off with Raylan, which seems to be inevitable, especially now that he has a hat too. I’ll hand it to him, he’s one creepy character. Without even showing a gun, his intimidation of that poor Harlan wannabe hipster and his girlfriend was terrifying. (Props for the credible pronunciation of “Louisville.”) I, ahem, trust that Raylan will be able to handle him. I guess I will be able to accept it if Raylan doesn’t get out of Harlan alive, but not that way.