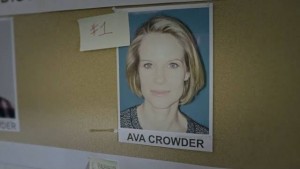 (SPOILER ALERT! Do not read further until you have watched Episode 11, “Fugitive Number One.”)

There was no whiskey – everyone was too busy running or shooting or dying to drink – but there was sure a lot to watch in this action-packed episode of “Justified.”

Ava, of course, is the Fugitive Number One of the title, and based on what we saw last night, she doesn’t have the greatest getaway plan. Uncle Zachariah (who, as we all knew, didn’t “run the wrong way” in that mine blast) takes her and the stolen money to an old-timer he says can get them to safety via old moonshiner trails. Unfortunately, they discover that the old-timer failed to get himself out of his own cabin, where he lies mummified on the floor.

Raylan is hot on her trail – but the feds are seriously questioning his motives after he appeared to let her get away. “Your marshal and his girlfriend have stolen $10 million right from under our noses!” Vasquez thunders at Art, who is finally back in uniform. Art can’t quite believe that, but when Raylan refuses to come back to Lexington as ordered, Art gives it to him straight: Raylan has 48 hours to make something happen. And then? “Everybody’s out looking for Boyd. I’ll be the one comin’ after you.”

Ah yes, Boyd. Surviving Ava’s bullet – I believe the technical term the doctor used was “you are one lucky sumbitch” – he is raring to go after her and his money, which, he tells Raylan, are one and the same. And should something bad happen to her? “Maybe she has whatever that is coming.”

If that wasn’t enough to remind us that despite his charming personality and large vocabulary Boyd truly is a bad man, we got more evidence when he shot Carl dead to create the chaos that let him escape from the hospital. Poor Carl. He was Boyd’s most loyal ally; in fact, he intended to help Boyd escape rather than kill him as Avery Markham had demanded in exchange for letting Earl live. But Carl had already written his own ending in that earlier jailhouse scene:

Carl: “Goddamn it, Earl – no! ‘They’s no honor among thieves.’ Crime does pay, as long as the criminals you’re working for don’t screw you over.”

Later, in Wynn Duffy’s RV, we saw perhaps the most touching display of loyalty that we’ve ever seen on “Justified.” Katherine Hale had arrived to kill Wynn following Mikey’s tip that he was the rat who’d gotten her husband killed. But like so many villains before her, Katherine messed up by monologuing before she pulled the trigger. Her little speech about loyalty to one’s partner caused Mikey to have a change of heart, putting aside the facts that he never got to choose the driving music and never liked being called “Mikey.”

What resulted was a spectacularly ugly fight that left Katherine dead with a crushed throat and Michael dying from about five gunshot wounds. “Hold me,” he asked Wynn after giving him the key to the cuffs. I don’t think Wynn knew just how much Mikey meant to him until that final moment. It was very touching, but of course the most important part is that WYNN DUFFY IS STILL ALIVE, AND SO IS MY BLANTON’S BET.

I’m not sure Katherine would have lasted a lot longer, anyway. Her “love” scene with Avery was fraught with tension; I kept expecting her to shoot him with her purse or him to shoot her in the back. But he did seem genuinely upset to learn of her death.

If only we’d seen the last of that insufferable Boon and his custom-made hat. (He had rejected the diner guy’s because it smelled of “patchouli and scared hipster.”) The show is clearly prepping us for a Wild West showdown between his gunslinger and Raylan, but I’m kind of hoping Loretta takes him out.