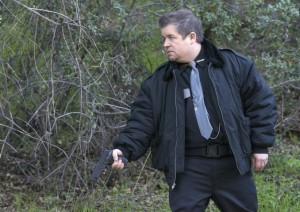 (SPOILER ALERT: Do not read until you have watched Episode 12, “Collateral.”)

“Justified” has always played in the gray space between good and evil, and that was never more cleverly referenced than in the opening of the series’ penultimate episode, with Raylan gone rogue, sans badge, and Boyd in a sheriff’s uniform.

Boyd quickly ditches that uniform for clothes “borrowed” from the son of the man whose pickup truck he has comandeered for his getaway. (In true TV fashion, these duds, like the uniform, fit Boyd as if tailor-made.) The man offers to give Boyd the truck, calling “the Outlaw Crowder” the closest thing Harlan County has ever had to Billy the Kid. “If they put out your greatest hits, it’d be a double album – all killer, no filler,” he says.

It sounds like hero worship, but this man has no illusions. He knows that when Boyd insists on his driving to the mountain where Boyd will hunt Ava, his time on earth is through. “I knew I’d be looking into the black hole of your gun,” he says, “like the plague you is.” Then he asks Boyd if he remembers a man named Hut McKean.

Boyd does not, nor does he care. Did he kill this Hut McKean? Did his men, or his drugs, or his daddy kill him? It doesn’t matter, and it doesn’t keep him from sleeping at night, he says, because unlike the other slaves of Harlan County, “My life is my own.” When the man replies, “You ain’t even heard a word I’ve said,” Boyd declares, “I’m an outlaw” and shoots him in the head.

Boyd may not care who Hut McKean was, but I do. It’s too specific not to mean something, right?

Speaking of names, elsewhere on the mountain, Raylan, who is looking for Ava and Boyd, has run into the distant relatives who tried to kill him in Season 4. “I don’t suppose you remember my name,” says Mountain Man No. 1. Raylan gives no indication that he does. When MM No. 1 complains about how Arlo treated his people badly and about how strip mining has destroyed their land, Raylan finds a way to finally unload his past by writing a note declaring that he gives his property to “this man.” Yeah, that’s probably going to hold up in court.

Also on the trail of Ava and the money is Avery Markham. Mourning over Katherine’s body, he asks why she couldn’t have done what she was told for once and left Wynn Duffy to him. “Revenge (is) what did you in,” he says. He then ignores his own wise words by declaring in the next breath that he will “gut Wynn from head to toe.”

Wynn, meanwhile, appears to be headed out of Kentucky forever – at least, that’s what he tells Vasquez as he claims his belongings, including a tube of toothpaste for his sensitive gums. “Raylan Givens, Boyd Crowder and Avery Markham are soon to converge, like the aligning of the planets, if those planets carried guns and hated my guts,” he says. Instead, he meets a source to arrange for a used dog grooming truck with a false panel – and pays for it by slicing open the toothpaste and pulling out Katherine Hale’s jewelry. I love you, Wynn Duffy, but dammit, you are going to fool around and get yourself killed and cost me that bottle of Blanton’s after all, aren’t you?

Vasquez has issued a BOLO for Raylan and is furious that is team is still covering for him. They are all co-conspirators in the theft of $10 million, he tells them.

So. Where is the $10 million? Ava has some of it in a backpack as she wildly runs down the mountain, having heard on Uncle Zachariah’s radio that Boyd is on the loose. Uncle Z prefers to make a stand at Grubes’ cabin, after giving what’s left of Grubes a proper burial. “We’re survivors,” he tells her.

Raylan finds Uncle Z first, and after being castigated for being as bad for Ava as Boyd has been, he heads back down the mountain after her. But who finds her first? Quite possibly the only truly good guy in Harlan County: Constable Bob. Hearing the BOLO, he’s “comin’ for ya, Raylan!” (but in a helpful way). He doesn’t even mind that Raylan has stolen his Crown Vic; he just fires up his Gremlin.

Bob cuffs Ava in the car with a zip tie, warning her not to test him. “And before you try to seduce me,” he said, adorably, “know that it’s been done before.” They hear shots fired. Drive away, Bob! But our noble hero cannot. He runs to help Raylan and is shot by Boyd. Ava manages to break free by breaking the Gremlin and runs again.

Now it’s just Boyd and Raylan on the mountain as the sun sets and the moon rises. They cross paths, fire at each other. How do you know it’s me? Boyd asks, and Raylan replies with one of the funniest lines of the entire series: “Your teeth glow in the dark.”

They exchange more gunfire, along with taunts about who is the real villain. Who, really, has crossed the line, and what is the real prize? Just then Bob yells for help – Yay, he’s still alive! – and Raylan proves that, at least for now, he can still do the right thing. He takes Bob to the hospital, where he is apprehended by the feds.

Boyd makes it to Uncle Z’s cabin. He avoid being shot by the Z Man and instead takes him down with a bullet. But the crafty old miner has one last card to play: He’s wired himself up with explosives! BLAM! Yet another “Justified” character is blown to smithereens. Boyd is injured but we don’t know how badly. (And I bet Uncle Z buried the rest of the money with Grubes.)

And Ava? She makes it to the very bridge where she cut the CI deal with Raylan, only to be picked up by those dirty cops working for Avery. They head toward the barn where Avery’s hired hand, Boon (read my interview with actor Jonathan Tucker here), has shot Loretta’s hired hand (and erstwhile boyfriend) and Avery has finished him off. Avery likes Loretta, and approves of her moxie in suggesting that he needs her more than she needs him to make his weed plan work. Why, she reminds him of a young Katherine, he says, as they settle down to wait for Ava.

Whoo. I don’t know what is going to happen next week, but I have a feeling that what Avery said to Ava way back in Episode 3 will come back to haunt him: “Women who aren’t harder than men don’t survive this kind of work.” I mean, does Loretta look spooked by Avery or Boon?

Last call: Once again, no whiskey was spotted; in fact, the only reference to any beverage was made by our man Constable Bob, when he put Ava in the Gremlin: “It’s nice in there. I got an air freshener that smells like a mocha latte.” Those in the Louisville area might be interested in a new item on the McDonald’s menu advertised during the show: The Spirit of Kentucky Burger, a quarter-pounder with bacon, cheese and bourbon-flavored sauce. Yep, everyone is into bourbon now. I’m lovin’ it.