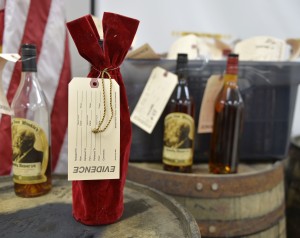 The powers that be haven’t spared our precious Pappy – yet. Recent reports that 28 stolen bottles of Pappy Van Winkle would be auctioned for charity regrettably jumped the gun.

Franklin County Sheriff Pat Melton, whose office recovered the purloined Pappy last April, told The Bourbon Babe today that Julian Van Winkle is still insisting the Pappy be destroyed following the trial in the Buffalo Trace heist, saying its safety cannot be guaranteed. “We were gonna try to do something good with it, but it looks like that’s not going to happen,” Melton said.

The final decision, however, is not his or Van Winkle’s to make, Melton added: It’s the judge’s. “Once the case is adjudicated, the judge will issue an order, and we will follow that order to the T.”

That’s why I appealed to a higher power last spring, sending a letter to then-Gov. Steve Beshear asking him to “Pardon My Pappy.” A social media campaign I launched asking bourbon fans to show their support by using the hashtag #PardonMyPappy on Facebook and Twitter went viral.

The case “garnered far more attention than I ever thought it would. We never anticipated the onslaught of international press,” Melton said. “It was shocking to me.”

It wasn’t shocking to me. Produced in limited quantities, Pappy Van Winkle is one of the most sought-after brands in the world, and destroying 28 bottles of it seemed like a crime on top of a crime.

It still does. Can you imagine how much money those bottles of Pappy, still bearing evidence tags, would raise for a worthy cause?

A trial date has still not been set in the case, in which 10 people were charged in connection with the theft of the Pappy Van Winkle, as well as about 22 barrels of Wild Turkey and Eagle Rare, over a period of seven years. I can see how the liquid in the barrels could have been contaminated. But the bottles of Pappy were still sealed. (And who would ever open them, anyway?)

There’s still time to make our voices heard. If you agree that the Pappy should be pardoned, speak out on social media using #PardonMyPappy. Write to Kentucky Gov. Matt Bevin (the governor is new, but the address is still the same: 700 Capitol Avenue, Suite 100; Frankfort, Kentucky 40601). Sign our petition.

This Pappy is still too young to die.