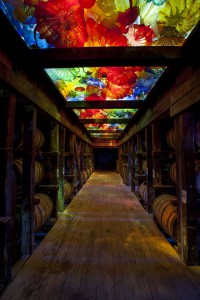 “The Spirit of the Maker,” courtesy Maker’s Mark

I’ve always been enchanted by the glass installations of Dale Chihuly. With their colorful, curly-twirly tendrils, they resemble exotic sea creatures, or perhaps far-flung nebulae. I’ve seen his work at such disparate locations as the Children’s Museum of Indianapolis and the Bellagio Resort in Las Vegas, and, since 2014, at Maker’s Mark Distillery in Loretto, Ky., where one of his Persian Ceiling pieces called “The Spirit of the Maker” leads visitors from the tasting rooms to the gift shop.

A new temporary exhibition of six additional Chihuly artworks that opens at the distillery on Saturday, July 1, and continues through October has more in common with his installations at various botanical gardens around the country.

Like those at the Missouri Botanical Garden in St. Louis and the Atlanta Botanical Garden, both of which I’ve visited, most of the pieces in “Chihuly at Maker’s” are outdoors, sited to complement the distillery’s already beautifully landscaped grounds. While they are dazzling during the day, the pieces will be transformed by light during “Chihuly Nights,” a series of Saturday evening events from July 22-Oct. 7. 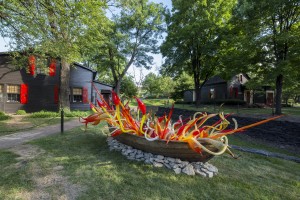 Three of the six works were created specifically for this exhibition: Amber and New Oak Chandelier, in the Distillery’s Visitor’s Center; Crimson and Chestnut Fiori Boat, near the distillery; and Sapphire and Platinum Waterdrop Tower, outside the Cellar. The other three pieces are Red Reeds, which cascade down the hill outside the Visitor’s Center; Summer Sun, located in the middle of the Maker’s Mark campus; and Red Baskets, inside the Cellar.

Seven members of Team Chihuly installed the six Chihuly sculptures between June 19 and 27. They were putting the finishing touches on the pieces when I visited Maker’s Mark on Monday to do a Maker’s 46 Personal Select with the other members of the Party Mart Bourbon Board of Directors. While all of the installations are gorgeous, the 12-foot-tall Waterdrop Tower is particularly spectacular. 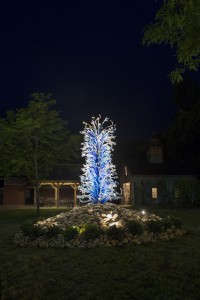 Tickets for the exhibition can be purchased at the Maker’s Mark site.

Old Forester Statesman
Mila Vanilla? No, thanks – I’ll have some bourbon