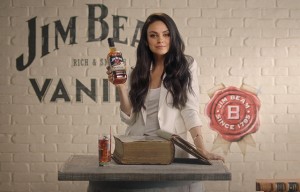 I suppose I’m aiming this question at all men, but I’m mostly interested in responses from the men in R&D at distilling companies — and my question is prompted by the release of Jim Beam Vanilla, a blend of Madagascar vanilla bean liqueur and Jim Beam Kentucky Straight Bourbon Whiskey.

“I’m thrilled to collaborate with my friends in Kentucky to debut Jim Beam Vanilla,” Kunis is quoted as saying in a Beam press release. “If you’re like me, you love the taste of bourbon but are sometimes looking for something a little different. Jim Beam Vanilla is perfect when I want a touch of flavor.”

OK, hold it right there. “A touch of flavor”? When I, and those in my bourbon-drinking sisterhood, want a touch of flavor, we drink… bourbon. Because unlike vodka, which must have flavors added to it in order to have any flavor, bourbon already has plenty — a whole spectrum of it, in fact.

This is not just anecdotal; I have proof (to use another bourbon term). In addition to being The Bourbon Babe, I’m a board member of Bourbon Women, a group that formed here in Kentucky in 2011 and has since spread across the nation. Bourbon Women is devoted to giving women educational, behind-the-scenes bourbon experiences and to giving the bourbon industry feedback on what women are pouring into their Glencairn glasses.

A graduate student at Anderson University recently surveyed our membership on their bourbon preferences. Here are the results, based on the choices given:

Jim Beam Vanilla is bottled at 70 proof, or 35% alcohol by volume (ABV) – 5% less than the minimum ABV the law requires for a whiskey to be labeled bourbon. This is also not good news if Beam is going after women: At every blind tasting we have ever conducted at a Bourbon Women event, the women have selected the highest-proof offering as their favorite — in one recent instance, Wild Turkey Rare Breed with a proof of 108.

Of course, as stated above, Jim Beam Vanilla is not bourbon; it’s flavored whiskey. And maybe women aren’t the target market. After all, Kid Rock repped Red Stag, and he doesn’t exactly speak to me, and most of the reaction to the new product that I’ve seen on social media so far has been of the “Mila Kunis is so hot” variety. Well, boys, you enjoy your Mila Vanilla. We women will be over here drinking the real thing.

One Response to Mila Vanilla? No, thanks – I’ll have some bourbon