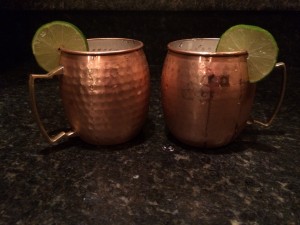 Sharing the recipe for the Kentucky Mule, a bourbon variation of the vodka-based Moscow Mule, got me wondering about that cocktail’s name. The “Moscow” part seems pretty obvious, since Russians are always portrayed as drinking that spirit from birth, but why “Mule”? And where did the nifty copper mug come into play?

It was off to the Internet, where I found that, as in the case of many origin stories, there was more than one. And none of them really explained the Mule reference; the best I can tell you is that the ginger beer gives the drink a kick like a mule, and (more probably) it was alliterative. At any rate, here is my favorite version, written for Liquor.com by famed author and mixologist Gary Regan:

“John G. Martin, an executive at the Heublein drinks company, availed himself of one of Land’s handy-dandy devices, and soon he was bar-crawling, taking pictures of bartenders holding a bottle of the firm’s newly acquired Smirnoff Vodka in one hand and a copper Moscow Mule mug in the other.

“The bartender got a copy for his troubles, and Martin took a second shot to show the next joint what the competition was selling. Martin was a true marketing genius.

“The Moscow Mule had been invented circa 1941, and although Martin often said that he and Jack Morgan, owner of the Los Angeles British pub Cock ‘n’ Bull*, created the drink, such might not actually be the case. According to a 2007 article in the Wall Street Journal penned by the reliable Eric Felton, the Cock ‘n’ Bull’s head bartender Wes Price also laid claim to the recipe. And I’m inclined to believe a bartender over a marketer…

“What we do know for certain is that Martin had bought the rights to Smirnoff for Heublein in the late 1930s, but he was having a hard time convincing Americans to drink the stuff. Vodka wasn’t very popular in the States back then. And it’s well-known that Morgan had ordered far too much ginger beer for his bar and was also having trouble getting rid of it.

“Ted ‘Dr. Cocktail’ Haigh, in his book Vintage Spirits and Forgotten Cocktails, adds another relevant fact to the story: Morgan apparently had a girlfriend who owned a company that made copper products, so the copper Moscow Mule mugs were relatively easy to come by for him.

“Though the Moscow Mule might not be a cocktailian masterpiece, it can be (provided you use a good, spicy ginger beer) a refreshing quaff, indeed. And according to Price, it entered the world in a very honest way: ‘I just wanted to clean out the basement,’ he said.”

* The Cock ‘n’ Bull pub no longer exists, but you can still buy Cock’n Bull ginger beer, which is what I use to make my Kentucky Mules.

My favorite summer cocktail: The Kentucky Mule
And the best Single Oak Project Bourbon is…